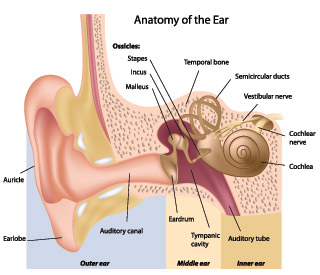 The human ear is divided into the outer ear, the middle ear and the inner ear. All three are used in the hearing process. The outer ear receives the sound waves, which then reach the middle ear where they make the ear-drum vibrate. When these vibrations reach the inner ear, it converts them into nerve impulses, which are then transmitted to the brain, which recognises the sounds and responds accordingly. The body’s balance is also controlled by the inner ear. When any of these functions are disrupted, and left untreated, they can lead to hearing disorders and even deafness.

Outer ear disorders
The outer ear consists of the visible part of the ear, called pinna, and the ear canal which leads to the ear-drum. Problems in the outer ear can be irritating but can be treated. The ear canal discharges ear wax in order to clean and keep the ear lubricated. Any excessive build-up of this wax, which should normally flow out on its own, can cause irritation and a sensation that the ear is blocked, and affect hearing. Using cotton-buds to clean the ear is not recommended as it can push the wax further inside and lead to more blockage and damage to the delicate lining of the ear canal. Even the use of some detergents found in some shampoos and chlorinated water can cause outer ear infections. The best way to protect the ear from such infections is by using a few drops of warm olive oil every night. Olive oil also helps in melting the excess wax so that it is normally discharged.

Middle ear disorders
Lying behind the ear-drum is the middle ear which has three small bones called ossicles, which transmit sound vibrations received by the outer ear to the inner ear where they are converted into electrical signals and transmitted to the brain through hearing nerves. Apart from the three little bones, the middle ear is filled with air that comes through the Eustachian tube. Disorders or infections in the middle ear can occur when mucus builds up in the middle ear after the person has caught a cold. This prevents air from getting in, and as the mucus thickens it can be infected by viruses and bacteria, causing pain and reducing hearing ability. At times the pressure that this thickening mucus exerts on the ear-drum can cause it to burst and then the mucus drains out.

Perforated ear-drum
The ear-drum is situated between the ear canal and the middle ear, and its function is not only to amplify sound but also to protect the middle ear from dirt. Some infections can lead to the inflammation of the ear-drum. Pressure from the fluids in the middle ear can also make the ear-drum burst, and when this happens a bloody fluid is discharged, often relieving pain. The ear-drum can also be perforated by use of extraneous objects like cotton buds to clean the ear. A perforated ear-drum usually heals on its own in a couple of weeks, but if it does not, then surgical intervention may become necessary.

Labyrinthitis
Sometimes an inflammation of the labyrinth can cause dizziness and nausea. The labyrinth is a coiled structure, filled with fluids, in the inner ear. One part of it, called cochlea, is responsible for hearing, and the other part, called vestibular system, is responsible for maintaining the balance of the body. Infection of the labyrinth can disrupt the balance system of the body and cause nausea, dizziness, disorientation and loss of hearing. Loud sounds and sudden movements of the head can stimulate the labyrinth and make the symptoms worse. Viral labyrinthitis is a more common disorder and can last for 2-3 weeks, but it is the bacterial labyrinthitis, though this disorder is less common, that is more dangerous as it can cause permanent hearing loss if not treated properly.

Adult hearing loss
As the body ages, the hearing faculties tend to become weak. This happens mostly after the age of 50, but it can happen before due to persistent exposure to loud noise, injury or as a result of some disease. Conductive hearing loss is a type which implies a poor transmission of sound waves, and is generally cause by excess build-up of ear wax. It is not a serious disorder and the excess wax can be flushed out by syringing the ear. The disorder most commonly occurs among children below the age of six years. The other type of ear disorder is the sensorineural hearing loss, which is related to the ageing process, or too much exposure to loud noises, and is caused by the deterioration of the cochlea. There are tests to determine the cause and seriousness of the disorder, and artificial hearing aids can help people who suffer from sensorineural hearing loss.

Tinnitus
When the hearing faculty of the body is damaged and causes the person to hear imaginary noises, the disorder is called tinnitus. The perceived sounds (whooshing, hissing, clicking, buzzing, etc.) can be intermittent or persistent and either one, or both, ears can be affected. The sounds can be caused by the pulsating blood vessels in the ear or false signals from damaged nerves. Permanent tinnitus is age-related and is difficult for the sufferer to bear. It can be stopped by cutting the auditory nerves, but doing so will mostly lead to deafness.

Meniere’s disease
This is a disorder affecting the fluid in the labyrinth, which consists of the organs of both hearing and body balance. It may lead to tinnitus, vertigo or a feeling of fullness in the ears. The root cause is the improper drainage of the fluid in the vestibular system, resulting in the increase of fluid pressure, which can damage nerves and severely impair hearing. This is a long-term disorder and difficult to cure. The symptoms can be very disturbing.

Vertigo
The disorder in which the sufferer gets a sensation that the body is spinning or tilting out of balance is called vertigo. It is sometimes accompanied with nausea or vomiting. It can be brought on by heights, an improper supply of blood to the balance system in the ear, migraine or stroke. The disorder can be aggravated by sudden movements of the head. The disorder can be treated with drugs that relieve nausea. Merely closing the eyes can also give temporary relief from the disorder.

It takes the coordination of 72 muscles to produce human speech